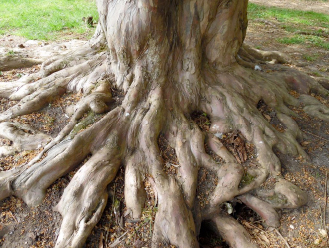 Your editor was unfortunately absent at the April meeting last year when Dave Dibden first came along to give a talk on coppicing so I was looking forward to catching up and was not disappointed. This time Dave concentrated more on the charcoal burning that occupies a lot of his time at Pondhead enclosure near Lyndhurst where he works for the Pondhead Conservation Trust. He took us through the various types of charcoal burner used over the centuries from the earth bank type to the iron skirt type up to the steel cylinder sort that he uses today. One interesting fact was the importance of vigilance with the early earth bank type since anywhere the flames broke through had to be instantly plugged. This lead to the invention of the charcoal burner’s stool which consisted of a disc on which to sit which had a single leg. Thus the burner was able to take the weight off his feet but if he nodded off, he soon found himself sprawled on the ground! – harsh but effective.

Dave is also a skilled craftsman with all things hazel and you can see in the photographs many of the things he makes and sells. I myself bought a large bag of charcoal which just about guarantees that we won’t have a barbeque summer. The photo also shows some of the hazel flowers that he produces and to round off his talk he gave us a demonstration of how he makes them using just a knife.

There is always a requirement for volunteers at the Trust so if you are feeling energetic and would like to spend some time doing something useful in the fresh air then go to their website, www.pondheadconservation.org.uk

The National Gardens Scheme organises the opening of private gardens up and down the country for the public to visit and pay a small fee which goes to charity. Looking at the booklet they produce for Hampshire, there is only one such garden in our area which is Atheling Villas in Hythe and the owners of that property, Mary and Peter York came along to our April meeting to talk about their delightful garden. The talk was accompanied by some great photos which started with a snow-covered winter scene and worked through the year with all the changing patterns and colours before finishing once again in the depths of winter.

Mary described how they had worked very hard to establish the garden in the first place and to look at the pictures you might think that they must spend all their time gardening but it seems the secret is to do just a small amount each day in order to keep on top of it. Of course the workload goes up just prior to an opening, especially for Mary who has to bake cakes and make tea for visitors but they obviously enjoy what they do and at the end there is a benefit for the charities involved.

The time had arrived once again to take on the ‘Oaklands Lot’
The evening commenced with Graham from the opposition winning the ‘heads or tails’ competition and maybe this should have been an early warning.
Because of the lack of numbers due to holidays etc. we were put in the position of having to loan half a dozen of our members to the other lot. It has to be said however that they did have a tenuous connection.

It all started so well. We raced to a ten-point lead at the half way stage, at which point complacency set in – either that or our loanees forgot who they were really playing for.

Our lack of stamina or fitness levels produced two no-scores on our part which enabled the other lot to turn their ten point deficit into a five point lead – the trophy now becoming our responsibility for the next year.

We can console ourselves with the thought that there is always another time – that is of course, if the opposition can raise a team!

Roger and Ann’s quizzes have become something of an institution within our club and that’s how we started off the meeting in May. This time it was five sets of five questions, each set on a theme such as having an ‘x’ in the answer or each answer beginning with ‘chris’ so that it made your brain jump about a bit. I’m embarrassed to say that your editor won it, which is also becoming an institution since I did the same last year – maybe next year I should set the quiz!

There were 10 carvings on display to be judged for the competition and all were of the usual high standard making a judging decision quite difficult. I guess some people look at the degree of difficulty, some at the artistic merit and some just pick what they would like to own if they had the choice. But whatever the reason, most people voted for Roger Elliott’s neck tie with Dorothy Lockyer’s gloves and book coming second. Congratulations to both of them and thanks to all who entered – better luck next year.

The last item on the agenda was the decision about the woodblocks. There were about seven or eight suggestions and Roger called them out one by one and asked for a show of hands. The result being that next Christmas we are all to turn up to the meeting with “Something I found on the beach”. So please – not a table full of shells.

Recent trips to Mottisfont and Wisley got me thinking; why do we bother carving wood when Mother Nature does such a good job by herself? Most of you will probably have already seen the item below, but for anyone who hasn’t then please read it as it sets out some ideas to make carving on the waterside a bit more simple than it has been up to now.

Changes to increase smooth running of the club

There has for some time been some confusion, particularly amongst new

members, as to the connection between Waterside Oak Lodge Carving Club

and Waterside Guild of Woodcarvers.

Your committee has proposed an amalgamation of Waterside Guild of Woodcarvers and Waterside Oak Lodge Carving Club, to be known as Waterside Woodcarvers, as from 1st January 2017.

The above would at one stroke:

September Newsletter No.93
Scroll to top